Zombie Massacre was the spiritual sequel to Ultimate Gloom, the first commercial release I ever worked on (see below). This was my chance to release another FPS game, and this time make it even more amazing. It was 1997, I was 17 when I started writing it (& studying A-Level Physics/Biology/German), and it was released when I was 18 years old, while already studying my computing science degree at Stirling University. It was a real treat to receive the parcel of free copies while sitting in my new accommodation at the university and tinkering with my beloved Amiga wondering what would become of my life, would I ever finish that zombie trilogy? See above for how that turned out, but needless to say I was actually writing the final installment (The Dead Walk [alongside Tiny Car Racing & Skoolz Out!]) when the free copies of Zombie Massacre arrived at my door!

After publishing Ultimate Gloom I felt invincible, could I do it again? The answer was yes! Why not? I spent around one year developing Zombie Massacre which includes a full motion video introduction and awesome CD audio composed by Will Morton. Will used this demo to get a job at Rockstar North and go on to make the music for all the GTA & Manhunt games. Coincidentally I ended up at Rockstar North too, working on GTA Vice City (needless to say they declined my demo, telling me they had already seen it!). That day was certainly an unexpected Alpha Software / Team Zombie Massacre reunion, I even did some voice acting for Vice City with Will at the helm, roles reversed.

One of the most exciting things about ZM (apart from the fact Will Morton used slowed down and reversed samples from porn films for the zombie groans) was the ability to finally get myself recognised as Alpha Software. My previous title had been published under another name, and I was anxious to get my own company name on there as I was planning on building the brand into a proper studio one day. It was Alpha Software‘s first commercial release, and not the last, I think Alpha Software are also credited for the development of Bust-a-move (on the ill-fated “Sidekick Blade” handheld) and Radiant Silver Sphere (Android/Mobile/Blackberry) to name just a couple, a good little run for a brand invented by a boy of 14.

Oh, I forgot to mention that making that introduction video was a highlight of the development process too (well my entire career), another childhood fantasy lived out, making a zombie film, even if it was a shabby short intro for a game (where the “actors” were my friends and the star was myself covered in beans, talc, Ketchup and Sugar Puffs).

Unfortunately I was legally coerced into closing Alpha Software in 2008 by an American company of the same name, who were formed after my company. I should have fought but I decided to lay Alpha to rest and formed Radiant Silver Labs, my current brand. I think it was then that I got obsessed with using too many italics on my portfolio.

Zombie Massacre did not quite get the reception of my previous title, although it was advertised quite hugely in the magazines and had many half page adverts the Amiga market had died down quite a bit by then, even CU Amiga magazine had gone (scans of them adverts and reviews to come when I find them!). Amiga games were no longer stocked in the high street in the UK, so I was denied that victory – it’s amazing to think how quickly the market crumbled even since my first game in 97. ZM was however (and still is!) sold in Software Hut in America (on the shelves originally), and many other Amiga specialists as well as currently still being available via some software retailers, Amazon and I see quite a few going on Ebay.

Zombie Massacre & Ultimate Gloom both featured on separate Aminet CDs as well as in different issues of Amiga Future magazine and on their cover CDs.

Alas, ZM was my last Amiga title. The sales were pretty dismal and I realised I had to plunge myself into the world of the PC in order to start making a living, I had left home, I needed to pay my way. I began focusing on the computer science degree and studying Java, so that I could build my next titles, and focus on the gargantuan PC market. I still had plans to finish my trilogy, even if it meant leaving behind my cherished Amiga development days.

Here is the issue of Amiga Format that reviewed it. 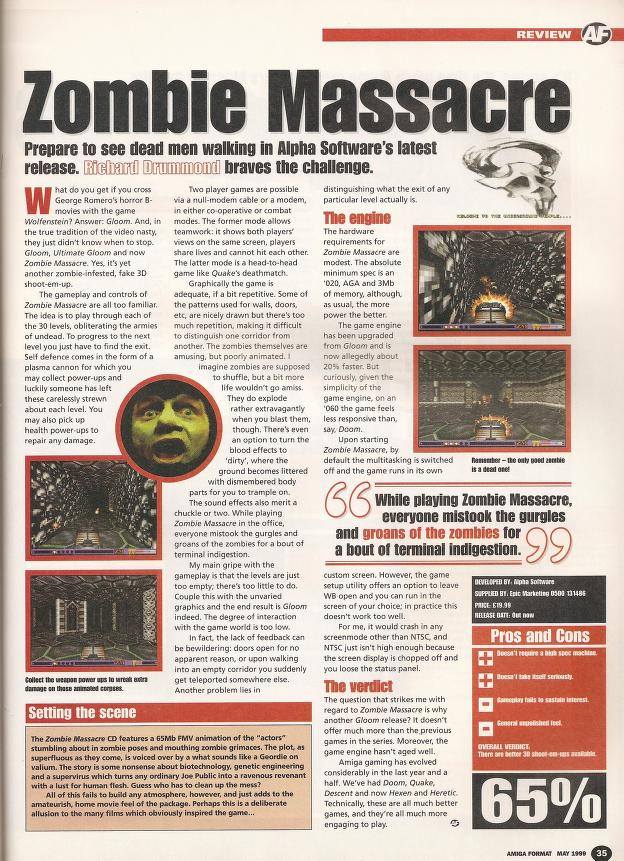 Amiga format review of my game Zombie Massacre, 1998. I developed this when I was 17.